Keep Calm and Carry On 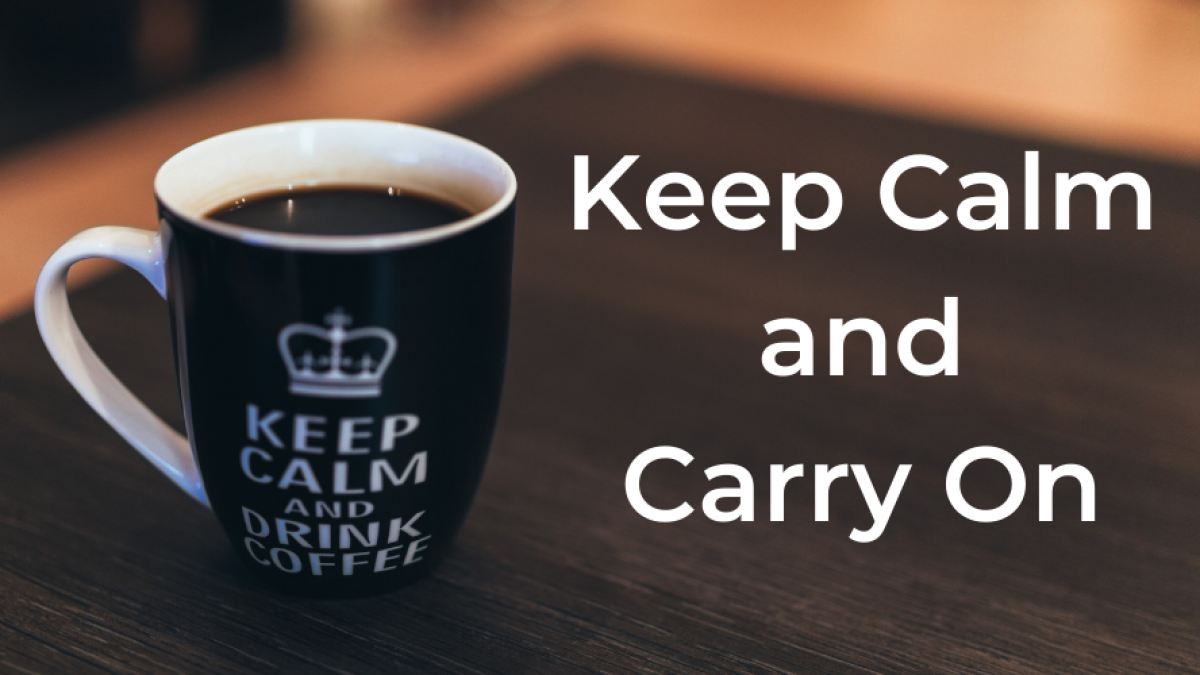 In broadcast productions, your leadership sets the tone for how everyone interacts with each other. So, knowing how to handle stress is important.

I recently wrote an article about what video people want from audio people. I started the article with a story about when I was working on an event in New York and I didn’t do a great job of briefing the audio company on what I wanted and so didn’t end up with what I wanted (go figure…..). I sent the article to the owner of Skystorm, the company doing the video production at the event, for his thoughts and he reminded me of a different story.

We were in the middle of setting up and I asked the engineer how we were doing. He said that he had two cameras working (we were aiming for four – so not ideal!). I “quipped” that I had done shows with less and was going for a walk in nearby Central Park. Why did I do that rather than expressing concern and trying to hassle to get things working?

Glad you asked. I believe in the principle of “Keep Calm and Carry On.”

After many years of working in broadcast television I know that how I respond in moments like this will either help or hinder the outcome. One of the greatest things we can bring to a production is calm. I have seen and worked with “stressed” directors, producers, camera people, engineers etc. and I can tell you, their stress is contagious and also counterproductive.

As leaders, we set the tone and the atmosphere for our environment. If we invite or “partner” with stress, it results in more stress. Instead, if we “keep calm and carry on”, it will result in a calm working environment where everybody has the chance to function well.

In my article “Harnessing Everyone’s Gifts and Talents” I said that “One of the lessons I have learned in my career is the importance of letting the right people do the right jobs”. I would go further than that. It is also important to let people DO their job without second guessing them.

In every event where I have been producing or directing, I have felt the weight of responsibility to have everything work well and the pressure to deliver the goods. That’s what I’m paid for so I have no complaints, but that can be stressful, particularly when things are not going well. In those moments, I get to choose to add my stress to others OR through my calm attitude take the stress out of the environment – I choose the later.

Back to the Central Park story to explain why going for a walk was the right approach.

I could have chosen in that moment to start hassling the engineer, asking him every 5 minutes how it was going, seeing if we needed to get more help, or get him to call a tech support line etc. This would undermine his confidence, ramp up his level of stress and mean he was not only having to deal with the problem but also cope with the stress I was bringing. It’s well known that when we are under stress we perform worse. He was the engineer so if anyone could get the other two cameras working it was him not me. By withdrawing myself from the environment, I was able to lower the stress and let him get on with it and he did, we had a full complement of cameras for the broadcast.

I have encountered similar situations many times in my career where I have the option to hassle and jump all over the person who needs to “fix” something or deal with a major challenge during a broadcast. I have the choice to dive in and start ramping up everyone’s stress by chasing and hassling the team to keep me updated, tell me what their solutions were etc. Any of this would have pulled them away from what they needed to be spending their time on and so would have been counterproductive.

There is a clear reason you want to jump in but my plea is that you avoid doing so.

What happens when you jump in? First, the stress levels you operate under will pass onto others (stress is contagious). Second, the people who are doing the job and trying to “fix” the problem will need to take some of their energy and focus and deal with you and your questions. This distracts them from what you need them to do which is fix the problem.

It all comes down to trust. Do you trust the people you are working with to do the job you need them to do? You know they’re invested into the success of the project (if you’re not sure of that then you need to have a very honest conversation with them) so you need to give them the space to do their job and not add to their stress.

One final caveat. This approach is still true even if you have skills that are specific to the area you have the challenge in. I am not saying don’t offer helpful suggestions or advice (if you have skills in this area), my challenge to you is that you set the level for the stress people operate under and when you take the wrong approach it is counterproductive to what your goals are.

Instead, Keep Calm and allow EVERYONE to Carry On.

Have you ever experienced a similar situation to what I described above? What did you do and what did you learn from the experience?

If you are enjoying this blog and the articles we publish here then we know you'll find our weekly emails valuable too.

Each week we send unique and helpful content directly to you that we believe will help you continue to grow and develop in what God has called you to.

Fill in your details and start getting content that will help you grow. 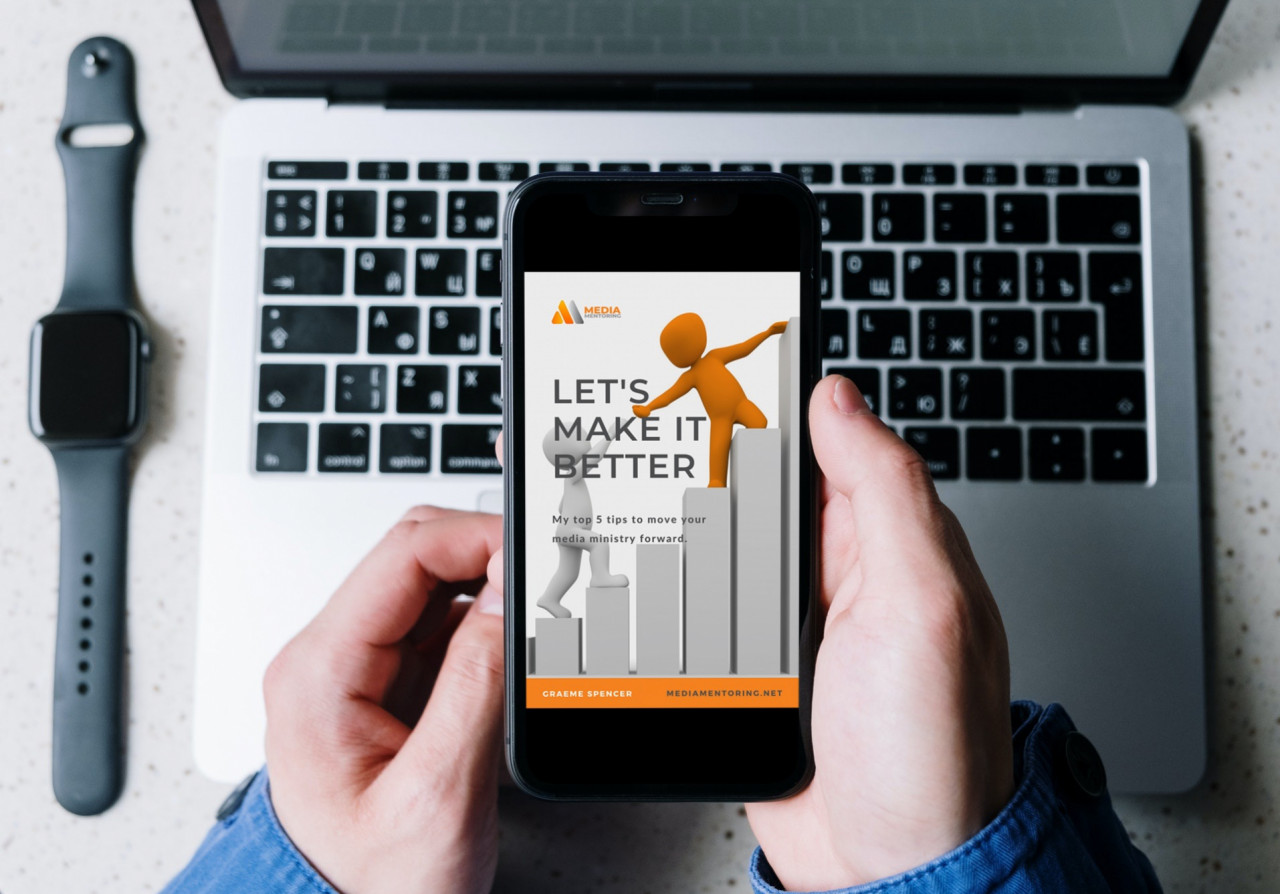 Get the help you need to make improvements to your online video content?

Download this FREE eBook
"Let's Make it Better: My 5 top tips to move your media ministry forward!"
If you find these Blogs helpful then we KNOW you'll love this FREE eBook.